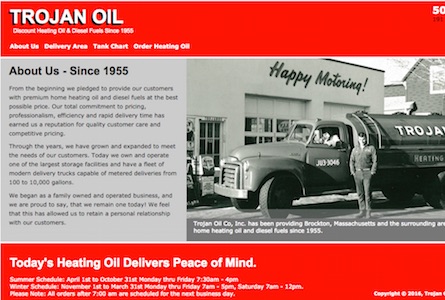 Trojan Oil first approached Charles River Web in 2010. They had a basic one page website with little more than their phone number. Meanwhile, their staff was overwhelmed with phone orders, and they were losing business to competitors with online ordering systems.

We built them an e-commerce site that allowed customers to order oil online. Trojan staff could easily update the price of oil, which often changes daily. Their staff could manage orders and view statistics through their website for the first time.

Six years later, they returned for an update. We revitalized their site, modernizing it with a new look, high resolution imagery, and improvements to the ordering process. The site was released in 2016.

This is a boon to us and our customers. We are happy to recommend Charles River Web for Drupal based eCommerce solutions.